You are one of the illune, a moonless guard tasked with the protection of the minds of the Royal Family of Spala, and now with the mysterious disappearances of an increasingly large amount of your people.

Set in a fantasy world inspired by ancient mediterranean civilizations, you play as an illune - a moonless mind guard - of the royal family. Unlike humans, moonless have no magical talents but the ability to walk the sleeping minds of others. It is something which historically has made the moonless outcasts of Spala’s society, but since gaining the trust and favor of both the royal family and the senate, things are changing for the better for your people.

Or they were, until moonless started disappearing under mysterious circumstances from the capital city Amelare.

Tasked by the royal family, with only rumors of the missing moonless suffering from strange dreams leading up to their disappearances, you and a small group of companions set out to find out why this is happening. But what will happen when the very same dreams begin to affect you? And what will you do when you discover a far bigger scheme than you could have ever imagined - and truths about the moonless people that will shake the realms to their cores?

base sugarcube template by ccberus

The Moonless is the first book in a series of interactive novels, with features including:

As the proxy of the heir to Spala’s throne, Silas has spent most of their life living as someone else. Now outside the palace, they are free to lead their own life and yet they seem content to quietly follow you. What else do they hide underneath their mask beside their face?

Like all moonless, Rainn has a distinctly non-human appearance. Dark indigo skin with white, cloud-like patches, lavender hair, and bright silver eyes, they are the very image of a stormy night. But through they easily stand out in a crowd, they’re a master at stealth and an active part of Spala’s moonless underworld. A face from your past, but what are their feelings on your reunion?

Though young and untested, there is more than meets the eye with Khalida. Quick with a blade and nimbler than most, she relies more on her physical skill than her magical talents. Loyal to a fault, she was devastated when her mentor became another moonless to have gone missing. Determined to find them, she will stop at nothing to bring them home.

the captain. MAL/MALIK/MALIKA [mid 20s, gender-selectable, romanceable by any mc]

Always with a twinkle in their dark eyes, M would hardly strike anyone as a mighty warrior, and neither do they want to. As the Captain of the Little Fortune, a private merchant vessel from al-Makāni, all they wish for is fun adventure, passionate romance, hold the danger, please.

the unknown one. [REDACTED] [age unknown, cis male, he/him, romanceable by any mc]

He calls to you in your dreams, but there is no face to put to his voice. Moonless - because who else can walk the dreams of others? - with motives as murky as any marsh and a rage to rival the seas. As you search for answers, one question echoes louder in your mind than any other: why does he sound so familiar?

Love this and I'm already in love with Rainn. And since I'm a self-inserter with my MCs my moonless is only 5'6, and all I can think of is when Rainn and my MC kiss Rainn has to pick them up off the ground to kiss them better. I keep laughing everytime

hi! i'm so happy you enjoyed it! as for the height, absolutely feel free to  headcanon a specific height for your mc, though i will warn you that the game will generally think of a very short mc to be around the same height as Silas (6'1)/taller than Khalida (5'7), since 5'6 would be tiny for a moonless,  but when it comes to Rainn, being 5'6 or 6'1 isn't much of a difference to their massive 8'2 💖

I'm not sure how I could save my progress when playing, but nonetheless I like this and hope for more content!  And yes I am making my MC short asf because height difference is just pure comedy for me

hi! you can save your progress by going into the menu in the bottom right corner - from there you can save to the browser (although these will disappear if you delete your browser history) or you can save to your desktop! more story is being written and prepare for even more ridiculous height differences in the future! 👀💕

I really like what im reading so far!!!! hope for more to come

Thank you so much! There's definitely more to come, especially since summer break is almost here and I'll have a lot more time to write! ♥️

Having the issue with inputting custom skin color: " Error: the passage "prologue26 skincolor" does not exist"

other than that, great story!

Thanks for bringing it to my attention, that shouldn't be happening! Definitely make sure to patch that for the next update! ♥️

just finished the prologue, and the world you're building is absolutely fascinating! super excited to see the customizable gender and pronoun options - i don't personally use neos but have multiple friends that are going to love this.  cannot wait to see where you take this project!

Thank you so much!  I really do hope that your friends enjoy the gender and pronoun customization, as it's something I myself feel is really important to include, rather than simply just male/female and then non-binary as an umbrella term for any other gender presentation/identity, even if that's not the focus of the game ♥️

whoa this is fascinating. it was a bit difficult to get into with a lot of text right off the bat but once I could get my bearings, it didn't take long for me to get deeply invested.

one "complaint", I guess: there's an undefined choice during character design. second to last one, I think? no explanation for what I choosing the color of.

Hi! Thank you so much for the feedback! I'll definitely look over what you've mentioned for the next update!

I'm not sure if the amount of text in the beginning you're talking about is the summary before the story starts (that's definitely something I'm looking to trim down a bit!) or if you meant the actual story, because then it might just be something to get used to? Either way, I'll look over it myself and see if maybe I can divide up some passages at the start to ease into it a bit more!

This story is very interesting and I'll definitely look forward to the updates.

However, I have an issue with the saves (not the menu bar). Whenever I used every single save slot, the ability to save disk or load disk are gone. I had to use maximum 4 slots so that I can use the button. I'm suggesting that you should put the saves table in the middle  of the screen with much more width like any other interactive fiction.

Here's a screenshot to show you what I meant. 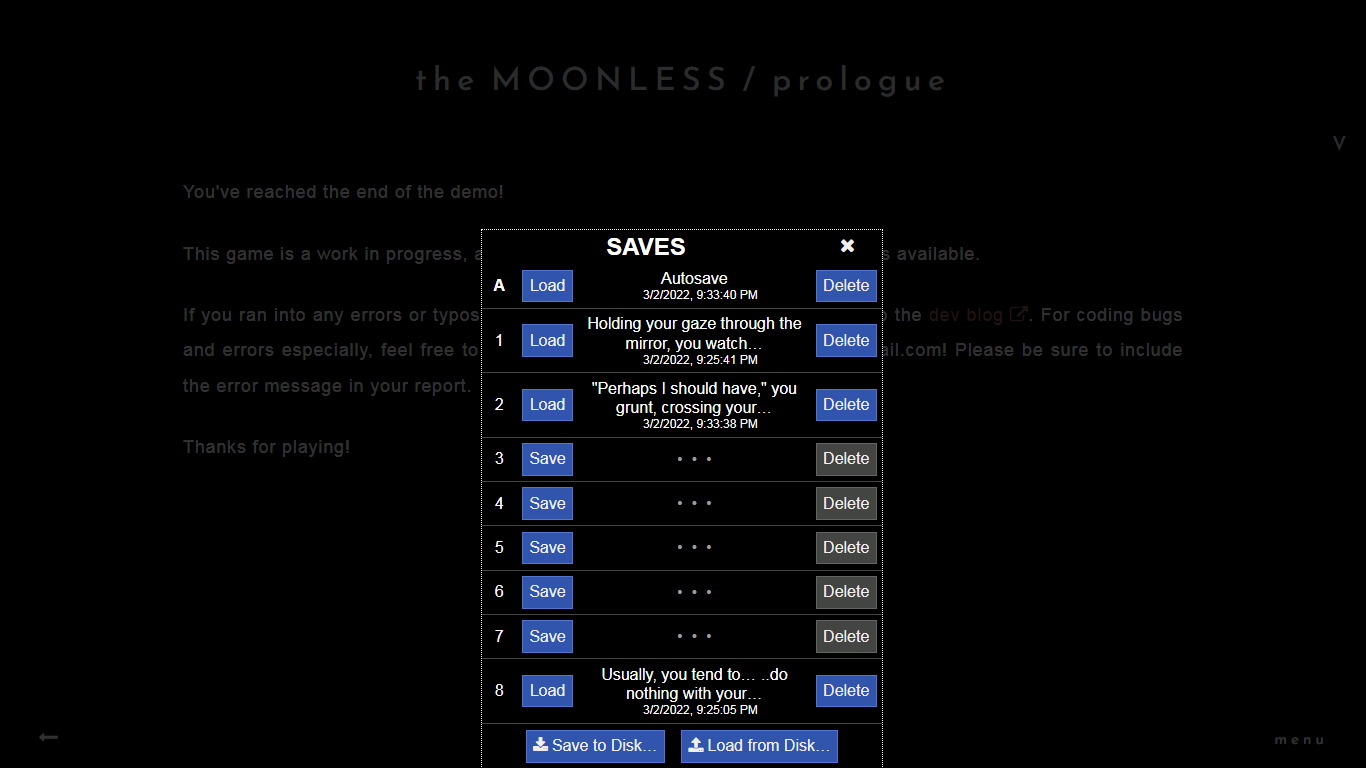 Thank you so much for bringing this to my attention, I'll definitely make sure to get this fixed for the next update! No point in having eight save slots if they make the save to disk/load options disappear.

this story it soo good!! I can't wait for more <3, also is there a save button? Because I can't find one and can you tell me are the RO will all be moonless??

Thank you for the kind words! There's a save button under the menu (located in the lower right corner of the screen, you can also find the settings and the restart buttons there, and profile and codex will be added in the next update!)

There'll be Rainn who's a moonless RO, Mal/Malik/Malika, Silas and Khalida are human ROs and The Unknown One is a secret until you find out in-game what species he is!

Oh my gosshhhhhh, this is SO good. Your writing style is really entertaining, and the imagery is really nice! I can't wait for more!!!

Thank you so much! It makes me so happy to hear that you enjoy it! ♥️

can’t type anything for some reason, lol

Hi! I’m not entirely sure if you meant you can’t type anything in the game, but I will check to make sure it’s not a bug! ♥️

It was a problem on my end; took a bit, but eventually I had to restart my computer and it fixed itself lol.

Oh good, cause I could not recreate the issue myself lmao!

I will quietly admit you had me at "giant"

And now that I've actually read it, I'm excited to see where it will go :)

I absolutely love this so far. I'm so invested in the story, I want to see more of it. Thank you for making this :)

Thank you so much, I'm so happy you enjoyed it! ♥

Thank you so much, I can't wait to share the continuation with you!

When I chose my own skin tone: Error: the passage "prologue26 skincolor" does not exist

Thanks for letting me know! I'll fix this as soon as I'm able to!

Trying to put a custom name wont allow me to proceed further ;v

Hi! Thanks for bringing it to my attention, it should be fixed now where after you put in own name, you just hit the "continue" below and it'll lock in whatever you chose! 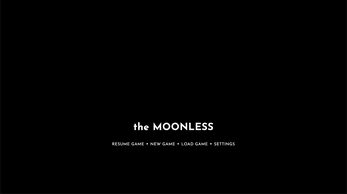 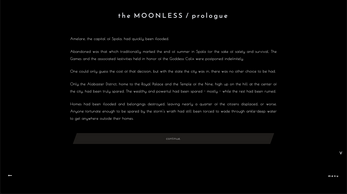 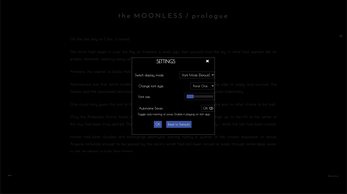